Hummelsbüttel has a lot of faces: from gorgeous villas near the Alster and the creek, Susebek, to multi-story apartment buildings in the old village center. When ploughing their fields the remaining farmers have a view of these settlements.

Basically the whole North of the quarter is dominated by fields and meadows. This, the Raakmoor, the Teetzpark, and some ponds build the recreational back for the quarter as well as for its neighbors. Up to the 19th century the main industry was the production of butter and later the famous red brick which played an important role during the reconstruction of Hamburg after the big fire in 1842. The beautiful villas along the Alster were built in this time. The remaining area became urban in the 1950’s, when after the Second World War, with the strong economic growth, the demand for cheaper housing was huge. The two big settlements, Lentersweg and Tegelsbarg, were built then. Unfortunately, no one was willing to invest in the village center with its old farm houses and they were broken down and replaced by apartment blocks. Whilst the big settlements characterize the structure of the quarter dominantly, there are also single- and two-family homes.

The real estate prices for single- and two-family houses are still at the higher side. Also the yearly income of taxpayers is basically on average level, perhaps slightly higher. The given structure of housing, villas on the one hand and settlements with a lot of social housing on the other hand, gives further insight into such average figures.

Northwest of the Susebek is an industrial area in the Lademannsbogen and North are fields and meadows. The smaller, residential areas can be split into the especially nice Alte Landstraße, which is the most expensive part as it is directly next to the Alster, and the two streets alongside the Susebek. Inbetween, single- and two-family houses are dominating. There are also big gardens, green roads, and the 1968-built bungalows designed by Helmut Landsmann. There are three shopping areas: the Hummelsbüttler Markt and the centers of the Tegelsbarg and Lentersweg settlements. 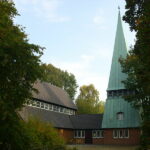 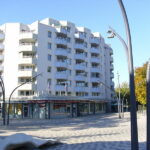