Jenfeld is the Southern neighbor of Tonndorf, hence its Northern border is lined up with the industrial area of Tonndorf. It has an industrial area itself in its Northern part. The middle has some multi-store apartment blocks an quite a few 4-5 floors apartment block areas scattered all over the district. Most of them originate from the 1070ies and are not that beautifully a sight. However, the remaining area is dominated by small single houses and two-family houses. The area around Liegnitzer Straße and Glogauer Straße is such a quiet family house area most of them having been built after the 2nd World War in 1950 to 60. But then it is surrounded by boring apartment blocks intruding the otherwise "medium income picture". The same architectural style dating back to that centuries can be found in the whole district.

The most preferred area in the district is triangle between Northern border and the two congestive roads Rodigallee in the South and Jenfelder Allee in the East, surrounding the small lake Jenfelder Moor which also offers some walkways. Real estate prices are affordable in this district, however, it is unlikely that there is going to be a significant increase in value. 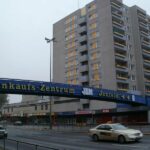 The districts center is where the Jenfelder Allee crosses the Rodigallee. A small shopping mall, made of grey concrete and not the most welcoming design, holds all shops to cover the basic needs. Jenfeld is just like other Eastern suburbs one of the lowest income areas and a fancy shopping mall would simply not find its customers here. Double as many residents live on social welfare and 9,7% instead of the 6,1% average are unemployed. Criminality is on average but in the night it has the reputation to be dangerous and recent reports have comfirmed violence of young men gangs.

There is, however, a tiny culinary highlight for insiders: as Jenfeld is home to most Vietnamese residents there is a typical Saigon style plastic-chair and cosy-neon-light restaurant which serves, in our opinion, the best Pho in town. It's crowded during lunch hours with Vietnamese, which proves the food's quality. The district's migrants population is among the highest of Hamburg and Hamburgers tend to believe that not looking Asian, Persian or Slawic actually makes you an outsider. Despite the quite residential single and two family houses Jenfeld is not a beautiful district.

It is still a very family-oriented district with 5% more family households than on average and 17 kindergardens, 4 primary and 1 secondary school take care of the roughly 4.700 children.