Rödelheim is a pleasant district in the north-west of Frankfurt, not far from the city centre between the rivers Nidda and Westerbach. Rödelheim is divided into two districts: Rödelheim-Ost and Rödelheim-West.

The importance of Frankfurt Roedelheim has always been in rapid flux. Historically a central traffic hub and one of the most important and largest industrial locations of Frankfurt, it changed into a refuge of tranquility when the modern street system changed the traffic flow. With one of the largest apple-weed wineries in the Rhine-Main region, it is the secret apple wine capital of the region.

Currently, Roedelheim is booming again. The Deutsche Flugsicherung (the office for international flight control) moved its headquarter here and brought an economy boost along. Various abandoned grounds, some left behind by the US army, are currently being cleared for demolition and new construction of, among other things, a senior citizen home and a city-owned bus maintenance center. The planned IT centre and high-tech companies of all kinds, especially in Eschborn's Landstrasse, also stand for this upheaval.

In the 1990s, Roedelheim made a comeback in the art world with various successful German rap musicians originating from there: the Roedelheim Hartreim Projekt, Moses Pelham and Sabrina Setlur. 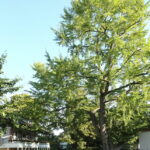 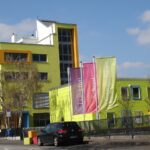 However, Roedelheim has been tied closely to culture, music and the arts for many centuries. During the romantic era in the early 19th century, Georg Brentano from the Brentano family – who played a major part in the German romantics – bought a mansion here. He built the Brentanopark around it, an amazing romantic-style array of 14 hectares (34 acres) filled with beautiful sculptures and the most diverse assortment of trees in any Frankfurt park. With its many small Greek bathing temples, garnet and orange trees as well as the Petri House as a meeting place for artists has not been preserved to the same extent today, but the park is still a beautiful destination for excursions into the countryside. Even if you shouldn’t move to Rödelheim – visit it. The Brentanobad at the northern end of the park is one of the most beautiful open-air swimming pools in the whole of Hessen, with many sunbathing areas, barbecue areas and an open-air cinema.
The 5 hectare Solmspark in classic landscape style also impresses with its old tree population.

Big name romantic poets such as Johann Wolfgang von Goethe, Clemens Brentano, the Grimm brothers, and Bettina von Arnim promenaded it. Characters in Goethe’s Sorrows of Young Werther were inspired by the Roedelheim family Buff. Additionally, Rödelheim used to be a center of Yiddish-cabbalistic folklore; a book Ma’asse (ajn schojn massebuch, a collection of Jewish folktales) was printed and published here in the 18th century.

Special landmarks of Roedelheim include the stadium of the 1. FFC Frankfurt, which is possibly the most successful women’s soccer team in the world, and the swimming facility Brentanobad, the largest of its kind in the entire city. While many parts of the district pose visual reminders of the large Roedelheim industry, there are numerous historical and cultural treasures hidden in the most unlikely places.

Roedelheim is the most diverse district of all of Frankfurt, uniting over 120 different migration backgrounds among its 18,000 denizens. It is also said to be a best practice example of integration and cultural diversity. This is largely because of the district administration’s and the community’s many initiatives against racism; for starters, you will find various signs in the district that remind you of the importance of hospitality and tolerance. So, it doesn’t come as a surprise that one of Frankfurt’s international schools is located in this district: the Metropolitan School Frankfurt teaches 400 students from kindergarten up to high school.

Real estate pricing is below city average in this district with tenants paying EUR 12.2/qm and owners paying EUR 4.4/qm. Rödelheim has some beautiful residential areas south of Westerbachstraße, where you can live well in a quiet neighbourhood. Rents are expected to rise here in the coming years. At the moment, however, it is a district between modernity and middle-class middle class. Rödelheim has a good infrastructure: there are shopping possibilities in the shopping and business centre between Lorscher Straße and Rödelheim railway station, schools, sports facilities and venues are available. It is well-connected to the city center with three S-Bahn lines and one U-Bahn line as well as eight bus lines. The S-Bahn will carry you from Rödelheim to the downtown traffic hub Hauptwache within 13 minutes. 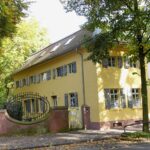 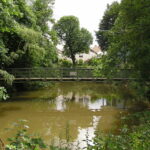 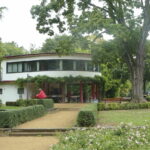 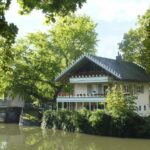 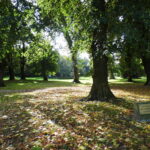 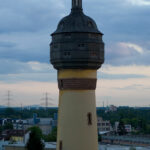