Riding the local trains and buses as a foreigner in Hanover? Well - limited German language skills actually are helpful since the information pages are in German language only! Other than that, the public transport in Hanover is very efficient and easy to use. 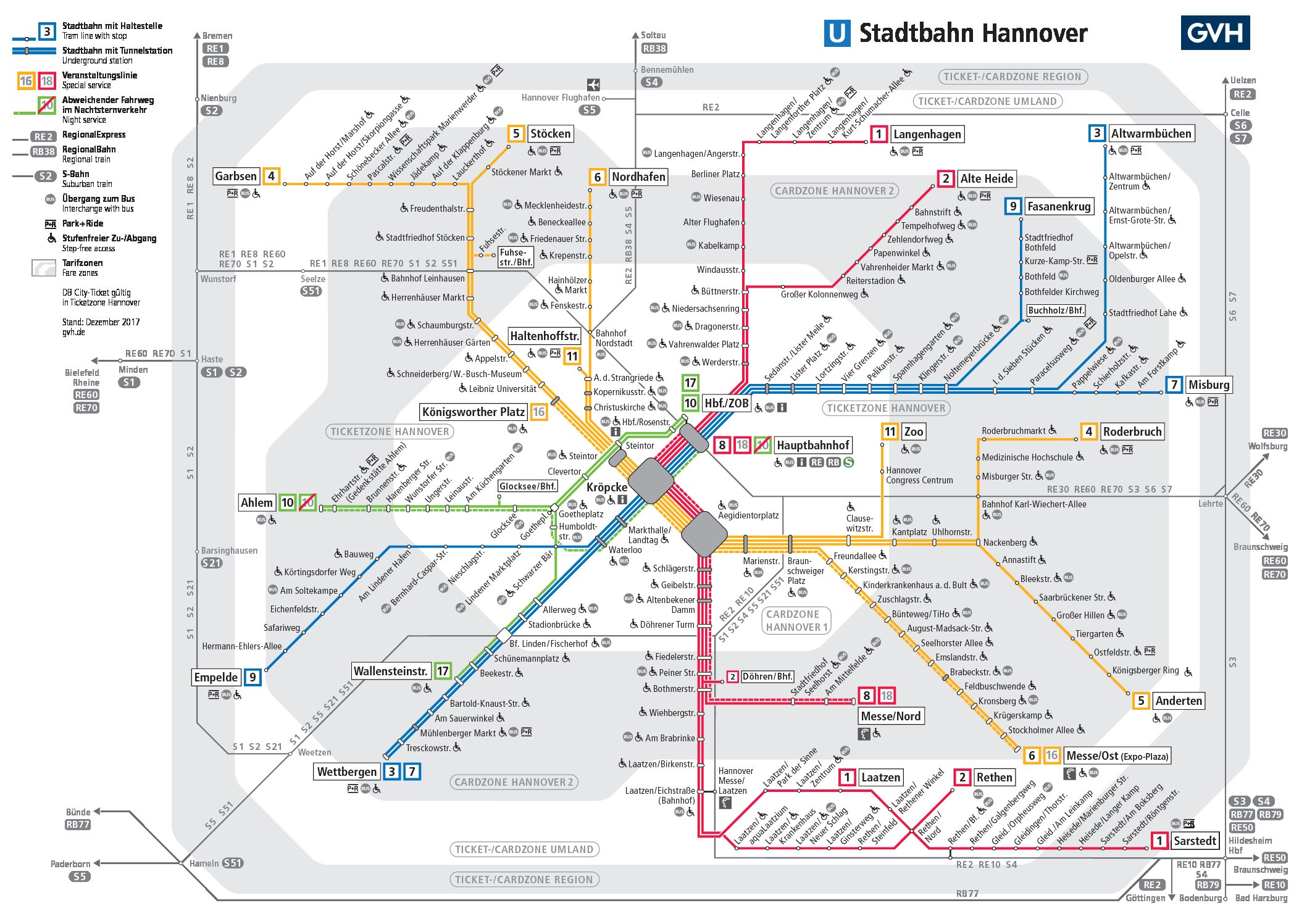 Anyone traveling in the Hanover region by bus, tram or commuter train uses a well-functioning and coordinated network of various transport companies, all of which are united in the "Verkehrsverbund Großraum-Verkehr Hannover" (GVH):

With EFA - the electronic timetable information - Hannover Region has all the information needed to travel by local train, light rail or light rail and by bus. Contained are the timetable data from all over Lower Saxony and Bremen.

The public transport called Üstra is really good in Hanover. There are 12 city trains and 38 bus lines connecting 872 stations all over Hanover and neighborhoods, 198 thereof train stations. Trains and buses regularly go at least every 20 minutes until the very, very late evening and then thin out to 30 to 40 minutes. During rush hours most of the trains go every 10 minutes. In the city center, you can reach almost any place within a couple of minutes. And, they are very safe. At night, you can even ask the bus driver to stop anywhere on his way to shorten your walk. A special women night cab offer is offered in conjunction with a train ticket during the winter season - taking a cab from or to a train station is supported with 2,50 EUR.

Anything you need to know can be found at the sites of Üstra directly, however, in German language only: www.uestra.de

The trains in Hanover are called "U-Bahn", "S-Bahn" as well as "RB" and "RE". The terms are actually rather misleading, but they grew historically and simply sustained.

The S-Bahn net (and regional trains) 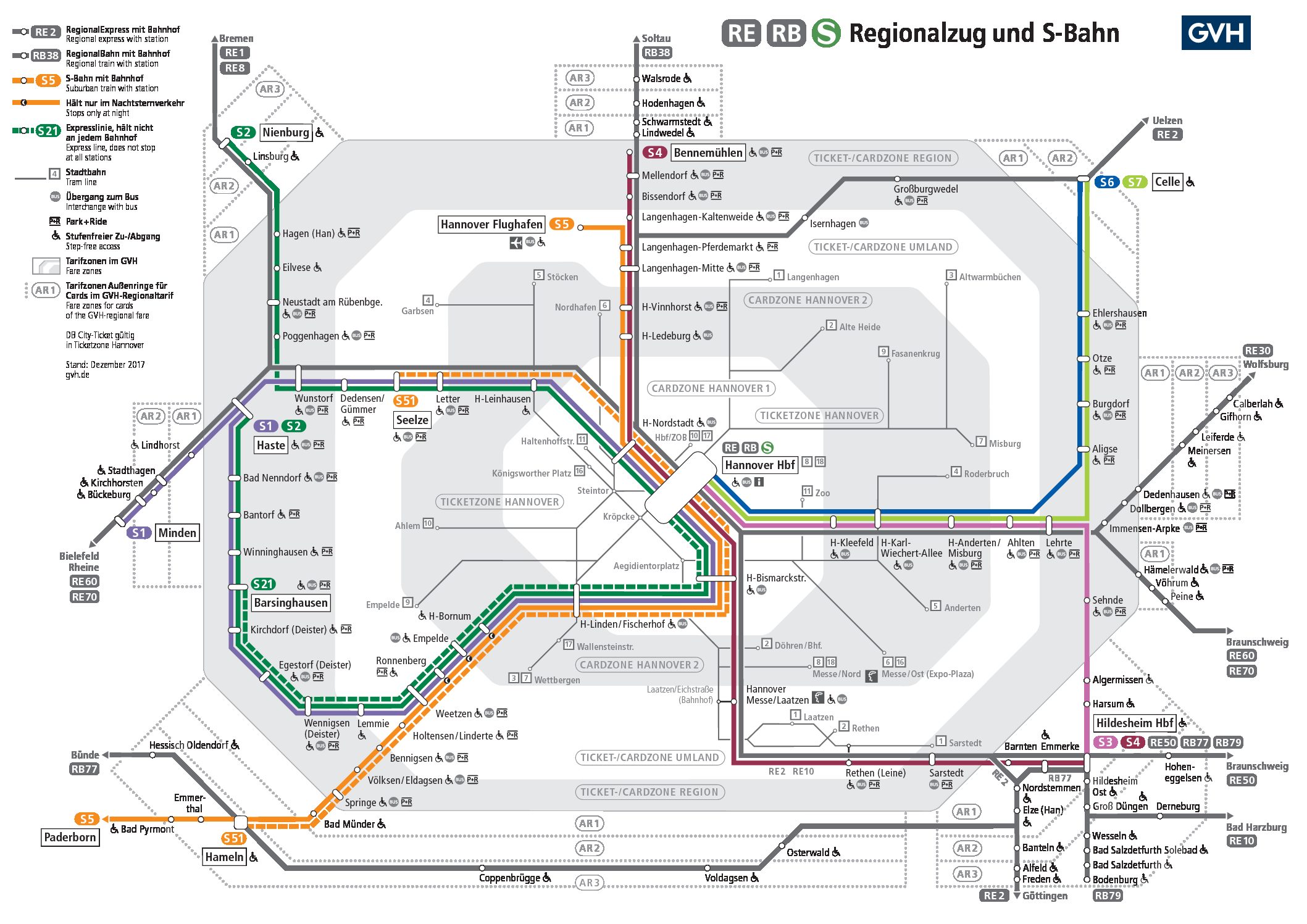 The ticket system is as in many other cities organized by distance and popularity. The zones you need to travel through determine the price of the fair.

The below picture gives a good overview for day tickets. If you live in Hanover, and you don't regularly need to travel outside Hanover, then the main zone is the inner one. There are two further zones. The area Umland includes cities and municipalities adjacent to Hanover, and the Zone Region identifies locations in the outer area of the Hanover region.

Similar to the single and day tickets, the monthly abonnements also refer to zones to define the prices. This type of fair is called "Card". There are several types of cards. In comparison with the ticket zones, there is one more card zone. The zone "Hanover" is devided into two zones 1 and 2. The area Umland includes cities and municipalities adjacent to Hanover, and the Zone Region identifies locations in the outer area of the Hanover region - this is similar to the ticket zones.

Pricing of single and day tickets

To buy the right ticket, you need to know where you would like to go to and from where.

If you need to travel around, it is always a day-ticket unless you are not moving around short ways. 4 short trips or 3 short-journeys equalize the price of a day ticket (whether or not before or after 9 AM).

There are four tariffs distinguished, and it is easy to distinguish by yourself which ticket applies. The network maps display the zones very transparently. Moreover, if you type in your destination, the ticket machine will indicate how much you have to pay.

In contrast to the single tickets, day tickets can be utilized for as many trips as you like.

The prices have been checked in 2018 last.

It is worthwhile checking the options of a monthly ticket versus going by car. There are a couple of alternatives:

How to buy a single ticket

Day tickets and single way tickets can be bought at each stop. Train stations have a ticket machine. You have to type in your destination stop and the computer will calculate your charge. The touchscreen also comes in English language - as well as in a couple of other languages. They sufficiently explain what you would need to do. The only difficulty is to identify your destination if you don’t know the station’s name. However, in most stations, there is both a train map as well as a huge Hanover map, with all U-Bahn, S-Bahn and bus lines. It is mostly next to the platforms.

Bus stations usually don't have ticket machines. You have to buy a ticket from the bus driver. He either knows the fare by heart or has a book to look up. Please be prepared that he will not change notes bigger than 10 EUR - the consequence could be that he does not take you.

It may be worth knowing that for safety reasons the buses only have coins boxes with a set number of coins - what should they do if these coins run out?

The most modern way to buy a ticket is the GVH App.

How to buy a monthly ticket

Monthly tickets cannot be bought in the buses. They can neither be bought via the online shop. So you need to go to the GVH Kundenzentrum at Karmarschstraße 30/32, in the centre of Hannover, to the Ticket Point at Ernst-August-Platz, to one of the Üstra infomobil trucks (schedules see here), or to one of the numerous service centers (a list is published here).

On www.üstra.de you can directly enter your starting point and target location (just put in the street names and choose "Straßenname" if you do not know the exact name of the stop). The result window allows you to drill down to the overall schedule of the line chosen or, additionally, to the map showing the stop and its neighborhood. It also indicates the fair you need to pay.

The GVH App gives you the same insight. Both tools are available in German language only.

A bus driver may at all times ask you to show your ticket. He is entitled to call the Üstra security which will charge you with “Schwarzfahren”. He is also entitled to ask you to leave the bus if you do not have a ticket.

Üstra security also conducts controls in the trains. They will take you out of the train if you do not have a ticket and take your personal details.

The penalty for driving without a ticket is 60 EUR.