A  PORTRAIT  FROM  A  RESIDENTIAL  PERSPECTIVE

Living in Darmstadt - sooner or later you will tumble over either of: Science. Space flight. Soccer. When Darmstadt catches the eye of the world, one of those keywords is usually involved. After spending most of its history strangely negligible, Darmstadt started coming into its own in the age of media and IT. Today, it is a big-name player in the modern sciences, modern arts, and serves as headquarters to prestigious new technology ventures such as SAP and T-Online. The European Space Agency ESA is located in the city district Griesheim.

Darmstadt is a large and densely populated city located at the outer Southern edge of the Frankfurt Metropolitan region. A residence of nobility in previous centuries, most of its beautiful historical sites were unfortunately destroyed in the second world war. The traces of the turn-of-the-century Art Nouveau community of the city were luckier. So, the cityscape is made of a wild mix of impressions. There are medieval residencies, greyish post-war structures, Hundertwasser architecture, and hyper-modern company buildings. Living in Darmstadt, you will mostly be surrounded by young families, students and artists, so the atmosphere is youthful and vibrant. Darmstadt has everything on offer that a young population might demand: sports and fitness opportunities, arts and music, festivities such as a Gay Pride parade. The soccer club SV Darmstadt recently spent a season in the Bundesliga, the highest professional soccer league of Germany. Although it was clearly outgunned, it collected a loyal and proud fanbase in the process.

If there were such a thing as an ivory league in Germany, Darmstadt would undoubtedly be part of it. It proudly carries the title “City of Science.” Its two biggest colleges, the TU Darmstadt and the Darmstadt University of Applied Science score extremely well in university rankings concerning the IT und engineering tracks. So, it’s no surprise that living in Darmstadt would also offer you some choices regarding the schooling of your child: The ESA child care center includes an English language preschool; the International School Schuldorf-Bergstraße, covering all ages, is located in the city itself. The Elly-Heuss-Knapp-Schule, a primary school also in the city, caters to French native speakers.

Christians and Muslims will always have an easy time finding a church or mosque in Germany. However, it should be pointed out that Darmstadt also has a very active Jewish community.

The rapid rise in real estate prices currently underway in Frankfurt has also affected Darmstadt, which is home to many commuters. But with pricing averaging EUR 3.635/qm (apartments) and EUR 3.545/qm (houses) for buyers, and EUR 11/qm for tenants, it’s still considerably cheaper, particularly in the suburbs. Furnished living space though is considerably more expensive, especially if you like modern furniture. Here prices are easily between EUR 15/qm to the mid twenties. It is further scarcely available and decisions must be taken quick because you will always have competitors also highly interested in renting the rare space.

The pricing is closely related to the availability of public transport. Featuring an inner-city tramway, various long-distance bus connections, and a subway connection to Frankfurt, Darmstadt is extremely well connected in general; as the subway and the long-distance train connections to Frankfurt run separately, this connection is also considerably less likely to fall prey to delays than most others in the area. Nevertheless, take into account that moving to a suburb will complicate a commute to Frankfurt; you would have to go to Darmstadt city by tramway, bus or car first, then take a train to Frankfurt from there. Commuting by car is usually less efficient. The two cities might be connected by the A5, one of Germany’s major autobahns, but that also means that you will likely get held up by the rushes of national travellers and trucks.

This district comprises the city’s center and university quarter. The architecture is very mixed: stunning landmarks showing off the prosperity of the City of Residence of the rich landgraves meet with grey post-war buildings. The population is very young, around 42% of the population is between 18 and 40 years old. The monumental Lange Ludwig, the landmark of the city, built in 1844, dominates the appearance of the Luisenplatz in the city center. Very close is the shopping mall Luisencenter and the smaller Schulstraße, Kirchstraße und Schustergasse.

The district is clearly the most popular for expatriates but also the district with the highest rents and little change of tenants. So it is hard to get an apartment here. 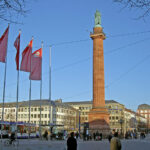 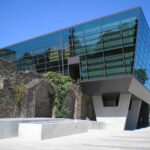 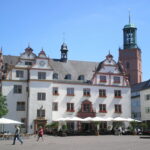 Luisenplatz © Heidas - Eigenes Werk, congress center enclosing parts of the historical city wall and the townhall © both by Carlos Delgado, all under CC BY-SA 3.0

Bessungen is another very nice district to consider when aiming to live in Darmstadt. Most of Bessungen's buildings were built in the 18th century, when the small town at the gates of the city became a popular destination for the nobility. At the beginning of the 18th century the orangery was created here with its symmetrical paths and water games. Most of the buildings are still very well preserved and have been lovingly restored. Thus the cityscape of Bessungen is characterized by the intact old town with narrow street and small courtyards. Owner-managed stores provide the people with daily necessities, numerous workshops surprise with original art. It is definitely the place to be, but just as hard to acquire as the above district Mitte. 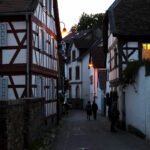 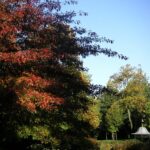 The old town of Bessungen © Archivarius Lindhorst (Own work), the Orangerie © panoramio François Philipp and the Prinz-Emil-Garten © derbrauni (Own work), all CC BY-SA 3.0

Arlheilgen is a very good district for families. At the end of the 1990s, a 20 hectare construction area between the newly scaped noise protection landscape at the railway, the cemetery and the sports center in the south, has been developed into a quite charming residential area. Another residential area was developed on the abandoned site of C. Schenck AG, north of the S-Bahn station Arheilgen, with apartments and private homes. The supply of attractive properties enriched Darmstadt's real estate market noticeably. The proximity to Frankfurt Airport is an important advantage for the whole region, but also leads to a noticeable noise pollution.

The Arheilger Mühlchen is one of the two natural bathing lakes of Darmstadt. It is idyllically surrounded by sports facilities in the midst of the green Ruthsenbach in the east of Arheilgen and is an oasis for families with children and peace-seekers. The old tree population of the lovingly maintained park provides the necessary shadow on hot summer days.

The district of Eberstadt in the South is one of the top locations with the highest price level for land and housing. The residential areas of Eberstadt reflect almost all of the important epochs of the urban development of the past centuries: the core of the district, Alt-Eberstadt, consists of many houses built in the 18th century. To the north of the district, Eberstadt borders Bessungen with its huge mansions in park-like gardens erected after the turn of the century. Modern buildings from the second half of the 20th century characterize the western part and multi-storey apartment blocks the southern part of Eberstadt. The latter is a neighborhood which suffered from social and economic problems causing a loss of image. And whilst many programs have been launched to improve its reputation, it is still probably not the preferred home for expatriates. 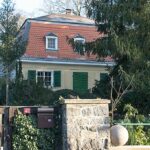 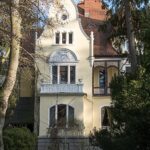 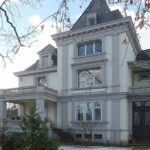 The villas in north: Villa am Elfengrund, Villa at Heidelberger Landstrasse and another villa in the same street © all by Hewiha (Own work), all CC BY-SA 4.0 via Wikimedia Commons

A bit further south is the picturesque castle Frankenstein. It does not literally belong to the city of Darmstadt but is just as well considered its most popular landmark. Numerous fairy tales and legends surround the castle, not least because of Mary Shelley's novel of the same name. Inspired by these myths, American soldiers initiated a Halloween festival in 1970, which is today the largest of its kind in Germany: on three weekends in October and November, the spectacle attracts thousands of visitors every year on the grounds of the castle ruins. More about the Halloween festival…

Castle Frankenstein: The inner castle and the sight from its top © both by Pascal Rehfeldt - Own work, CC BY-SA 3.0

In recent years, Kranichstein has grown by approx. 11 thousand people to the most colorful district. Particularly the new construction area in the west is popular with families with (small) children because of effective traffic calming measures. The district is named after the nearby hunting lodge and former summer residence of the Darmstadt Landgraves. Today, Kranichstein is a multicultural district with a linguistic and cultural diversity that is hardly matched by any other part of Darmstadt: residents come with a background from over 80 nations, and roughly 20% of the inhabitants are of foreign origin. 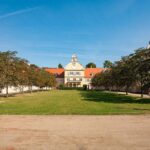 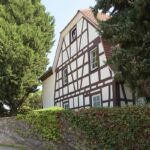 Highly committed district work has successfully developed Kranichstein into a lively, urban district. The cityscape of Kranichsteins is characterized by modern buildings from the last century. On the southern and western outskirts of the town there are also residential areas with model building complexes and terraced houses in low-energy and passive house construction. Numerous ponds form the core of the district and lakes are spread out in the comparatively small residential area of the center. They represent an important recreational area offering lots of leisure activities.

However, there are areas which should be avoided if not from an aesthetical piont of view: the multi-storey settlement around Gruberstrasse and Pfannmüllerweg are not the most beautiful pieces of architecture ever constructed.