Isarvorstadt is a very mixed district. It has less attractive neighborhoods around the main station and super attractive quarters like Glockenbachviertel and Schlachthofviertel.

The less attractive parts have a bigger population with migrant background and the Turkish population is one of the most dense in the city. Right behind the main station is the red light district where sex shops, brothels mix with kebab bistros and call shops.

A place probably everybody all over the world knows is also located here: the Theresienwiese where each year end of September beginning October the big “Oktoberfest” takes place. And the famous “Hofbräuhaus” is also already part of Isarvorstadt.

Another well-known area, though not residential, is the direct neighborhood of the German museum (“Deutsches Museum”).

This very lively district is also super centrally located. There is also the so-called “Gaertnerplatzviertel” which actuallynot part of the Glockenbachviertel, however, is often used as synonym as both quarters are located right next to each other and are absolutely similar in character.

The neigborhood owes its name to a creek which flows through the quarter – underground actually. And the creek got its name because it was part of a manufactury that casted bells for churches. In ancient times the whole quarter was devided by many small creeks – nowadays there is but one, the Westermühlbach”. The district's western limit is the cemetery "Alter Südfriedhof". This cemetery was the only one back in the 18th and 19th century and was hit by a couple of bombs in the 2nd World War. Thereafter it was converted into a park, but there are still some ancient tombs of a number of famous personalities.

Having been the home of craftsmen and tradesmen once, the Glockenbach neighborhood became the place to be for gays and lesbians. Locations like "Nil" in Hans-Sachs-Strasse 2 or the bookshop „Max & Milian“ in Ickstattstrasse 2 matched the Zeitgeist. A proof of the quarter's openness and flexibility can be seen in the history of „Sushi & Soul“ in Klenzestraße 71. In the 80's it hosted the "Ball of lonesome hearts" with table telephone and dance music – an institution of the time. When singles had realized that they were hot commodity the location turned into "Ballhaus", the city's first bar with Japanese food, and then into a Sushi restaurant with cool music.

Hans-Sachs-Strasse is always worth a stroll. It is only 200m long and lined by manorial buildings of the Wilhelminian era as well as several hairdressers and locations like the fancy "ess neun". Trendy boutiques, a theatre and a cinema which is almost a hundred years old, the "Neues Arena", a worth peaking in.
Yet, the quarter also offers beergarden oases that seemingly have passed the zeitgeist. The "Fraunhofer" for example. Enjoy your beer and affordable Bavarian culinary delights while seated comfortably at long wooden tables. A treasure for cineastes can be found in the backyard: the "Werkstattkino". For over 33 years fans of venturous or wicked movies walk down the catacombs.

The whole quarter has a very casual and tolerant touch, offers beautiful buildings, loads of relaxation options, shopping and socializing places and is as central as can be. It shows in the prices, though.

This quarter got its name from the big slaughterhouse which has been located her since 1875. It has seen a long and interesting history. On the early 18th century there were but two slaughterhouses in Munich, and the cattle was driven through the streets. Later – but much later – they were brought by trucks. The quarter therefore had a very industrial character and was not attractive for residents.

It has, however, benefitted from the recent development of Munich as a rising economic star and the explosion in real estate prices in the direct neighborhood. Investors bought significant pieces and converted the land into fancy top-notch residential yet urban newbuilds. Together with the older apartment blocks it results in a very nice mixed population.

The Schlachthof itself sold some of its halls which were no longer used when technic improved. Otti’s Schlachthof has become an institution: a cabaret location named after a famous, very big actor. 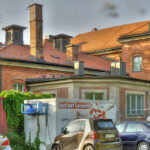 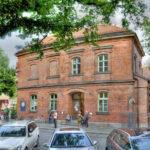 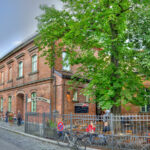