If we Hamburger hear Horn, we think Horner Kreisel, which is the roundabout which leads to the motorway, and we think Horner Rennbahn, the racecourse where the German Derby is held once a year. Other than that we don't know much about the district unless we live in it. It is a district offering affordable rents and a significant area in the South is a garden colony as well as the area East of the racecourse. There are very few single or double family houses and residents mostly live in, mostly simple, apartment blocks. Average taxable income is one of the lowest in Hamburg and that shows. You wouldn't find fancy little boutiques here or hip restaurants. It is a rather basic district with more discounters than organic supermarkets.

The district is not really popular but the reality is, as so often, better than its reputation. The Northern border is the said motorway starting in the Eastern corner with the Horner Kreisel. Three big congestive roads connect the Eastern districts with the city center and run, mostly parallel, through Horn: the Washington Allee (becoming the Sievekingallee nearer to the city), the Horner Landstrasse and the Bergedorfer Straße. Whilst the residential area North of Bergedorfer Straße is shielded from the noise by huge walls, the Hammer Landstraße provides for quitesome noise and smog. However, there are other, bigger residential areas North-East of the Washington Allee and the Western part of the district which are basically quiet. The dominating architecture are 3 to 4 storey red brick apartment blocks built after the 2nd World War. There are also some Fritz Schumacher buildings remaining. The development office took care that there is enough space between the blocks for some green and trees. A newbuilt settlement around Riedstrasse replaced the historical Ried settlement and nowadays offer modern, but basic, townhouses at affordable prices for families. The affordable prices combined with the green space between the apartment blocks make the district popular for families. 18 kindergardens, 5 primary schools and 4 secondary schools take care of the over 5.600 childrens' education. 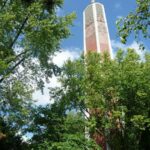 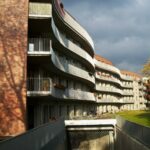 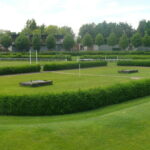 The predominantly negative image of Horn origins from the lack of beautiful architecture and the social structure. It is supported by a rather high unemployment rate of 8,7%, and is corroborated by a high percentage of residents living on social welfare (19% - being nearly double as the Hamburg average). Furthermore, there are a lot of foreigners and migrants living in Horn and many Hamburg born purebreds have difficulties with that. However, criminality is on average level.

Horn's centre has been destroyed during the 2nd World War and still struggles with its redevelopment. There are two smaller shopping malls, the EKZ (EinKaufsZentrum) Horner Rennbahn and EKZ Mahnsardstraße (http://www.ekz-m.de/) . There is a lot being done to create an active district centre and to improve the districts reputation. 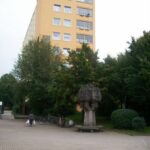 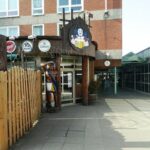 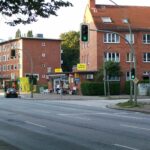