The advantage of Hamm-Nord is its closeness to the city-center and the cheap rents.

With 22.000 EUR yearly taxable income residents are some 10.000 EUR less wealthy than the average “Hamburger”. And that obviously shows to some extent: restaurants and shops reflect the budget and you will not find fancy stuff here. The most important other statistical figures are better than or equaling average, e.g. unemployment is slightly below average, residents with migration background form a percentage of 26%, which is also below average and so is criminality. Still, the district is not particularly preferred – if one can afford, one would always try to live in the popular districts. One reason is probably its direct neighborhood to Hamm-Mitte, a district with a lot of migrants with low income and above-average criminality. Hamburg residents do not really distinguish between the three different “Hamms” and often put all of them in one drawer.﻿

Hamm-Nord is one of the most densely populated districts. 12 kindergartens, two primary schools and two secondary schools do take care of approximately 2.100 children. It is, however, not among the family-friendliest districts as only 9,6% of the households have children (17,5% would be the average). It is, on the other hand, a district where a lot of singles live: 69% versus an average of 53%. This is, apart from the low rental prices, reasoned by the architecture which offers an above average number of small flats. Although a significant number of apartment blocks do still show facades from the early 19th century, designed by red-brick architect Fritz Schumacher, due to its bombardment in the Second World War most of it had to be rebuilt from scratch. Fortunately, some aesthetic politicians decided to keep the facades. Hamm-Nord has started as a residential area for officials and bureaucrats after a temporary period in the late 18th century, when wealthy Hamburg business men discovered the former farmer’s land for their summer houses.

Recreation is offered by the rather big Hammer Park. It has been redesigned by Otto Linne in 1914 and has quite nice spots. The flower beds as well as the herb gardens are beautiful to look at in summer and a little pool invites children to explore the water element.

Hamm-Mitte is located between the Eiffestraße and Hammer Landstraße, both being two major connecting streets from the outskirts into the inner city and Eiffestraße being primarily industrial area. Whilst the northern side of the Eiffestraße is flanked by apartment blocks, the location is not recommendable as a residential area due to the noise of the many commuting cars. Despite two further industrial sites, the area between these two roads is a quiet residential area with apartment blocks built in the ’1850’s and many big trees. The quarter was completely destroyed during the Second World War and has since been rebuilt. Shops are situated at the above mentioned major roads and a “center” as seen in other quarters does not exist. With the 27.000 cars commuting via Hammer Landstraße and 58.000 cars via Eiffestraße, it is not the coziest place to shop for one’s groceries. Recreation is sought either in the Hammer Park in Hamm-Nord or in the open air swimming pool in Hamm-Süd once the weather is warm enough.

42% of the residents have a migration background, which is significantly above Hamburg average of 29% . 70% of the children (aged below 18 years) either immigrated themselves or have parents who immigrated. The quarter is not very preferred by families and only 11% of the households have children. Unemployment is above average as is the number of residents receiving social welfare. The average taxable income is 13.000 EUR less than the Hamburg average. Criminality is slightly above average. 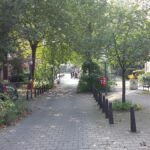 Just like Hamm-Nord and Mitte, Hamm-Süd was completely destroyed by operation “fire storm” at the end of the Second World War. Very few buildings, rather “facades”, survived that bombardment. The schools of Osterbrook and Hansa-Burg are examples and were originally designed by the famous architect, guess-who - Fritz Schumacher. The whole western part of the quarter, basically west of the street Osterbrook is an industrial area. The eastern part is a garden colony, hence only a very small area is residential, but is actually quite a nice location as the newly built apartment blocks are modern and overlook the Bille Elbe side-arm with some pittoresque house boats.

If you like water, the district is one of the affordable neighborhoods where you are located superclose the quite a few channels. There are renting possibilities for canoes and the-like, and Aschberg, the open-air swimming pool is located north of the garden colony. The highlight is the 111m water slide.

The district is relatively popular for students as the city center is reachable by bike. 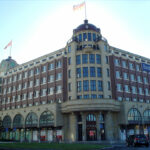 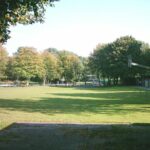