Fuhlsbüttel = International airport, that is the perception when you tell people you live in this district. Although it is the district which houses Hamburg’s main airport, Fuhlsbüttel is not just the airport. The residential area is Northeast of Zeppelinstraße running past the airport. Two large congested streets run through the quarter, Alsterkrugchaussee, and Erdkampsweg. Close to the airport and at Ohkampsring there are some apartment blocks but the remaining quarter is dominated by single- and two-family homes. Some of the homes in this area are gorgeous townhouses from the early 19th century.

There are many really nice areas. Whilst one might guess that the best is east of Brombeerweg because it is close to Alster, this is only partly true, because Brombeerweg is a four lane road. Hence, the atmosphere is definitely not cozy. Brombeerweg is, however, still relatively quiet in comparison to the other two named above. I personally like the area around the U-Bahn station Fuhlsbüttel – including but not limited to the Heinrich-Traun-Straße, of which we have a couple of pictures below. There are limited shopping facilities, easy access to airport, and a city center. Additionally, there are some absolutely beautiful villas from the Wilhelminian era as well as the so-called “coffee mills” (cube-style houses which resemble the form of an ancient coffee mill) – very much wanted red brick villas. This area is cozy and quiet. 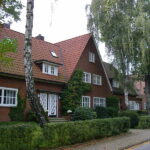 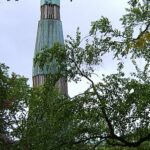 Another very nice area is in the Eastern corner of the suburb between Hummelsbütteler Landstraße and Brombeerweg with the settlement Alsterhöhe, which was built in the British garden style between 1907 and 1939 (see picture no 3 below).

South of Etzestraße the atmosphere is less noble, however, it is still a very nice and green area. The parcels are smaller and there are more apartment buildings. The Southern part of Erdkampsweg is the shopping street of Fuhlsbüttel with many shops, supermarkets, some boutiques, bakeries, etc. There is also an open air market held twice between Ratsmühlendamm and Fuhlsbütteler Damm. A few restaurants complete the package.

There is a smaller park in the very North of the district, a couple of meadows used for playing soccer, and, of course, the Alster with its km-long walkways. The district is family-friendly and offers 11 kindergartens, 2 primary schools, and 1 secondary school. It also has several sports clubs and quiet, low-traffic roads. Most of the buildings have huge gardens. Criminality is above average, but this is mainly due to theft, probably committed at the airport.

You definitely have the noise from the planes, however, it is not overly obtrusive. It is, however, certainly worthwhile to test that before you move here. 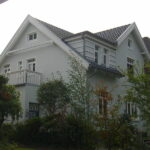 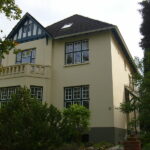 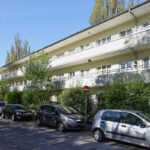