Wellingsbüttel was a rural area north of Hamburg and was owned by the archbishop of Bremen since 1412, who was renting it out to Hamburg canons. It was later occupied by the Swedish crown (1648). In 1673 the Kurtzrock family bought the land and the Herrenhaus as well as the Torhaus are living heritage from that family. It changed ownership a couple of times after that.

Just like the other more rural former outskirts of the city Hamburg, it became more popular in the early years of the 20th century when owned by Otto J. Hübbe who decided that farming was not beneficial enough and participated in the foundation of the Alstertal-Terrain-Gesellschaft which sold partitions to Hamburg residents. Some of the stipulations of the ancient contract are still in place and the result are grounds of a minimum of 1.000m², the prohibition to split the land and the obligation to build single-family houses only. However, in the late 20th century a couple of modern apartment houses were built and attract younger families. The main street is Wellingsbüttel Landstraße, a two-lane alley connecting the northern suburbs to the city center. Despite the existence of the larger connections of Saseler Chaussee and Alte Landstraße, the Wellingsbüttel Landstraße is a popular evasion and thus is rather congestive. 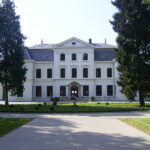 It was the best residential area in the early 20th century as it ran directly next to the river Alster and magnificent mansions were built. The exclusive character remains today and huge villas can be spotted behind green hedges. East of Wellingsbüttel Landstraße the area is a little less exclusive. After the Second World War, many refugees found a place to live here and smaller and more modest houses determine the area’s image. Red brick is dominating and the roads are mostly alleys with huge trees planted some 100 years before.

Two train stations are the direct connection to Hamburg city center. The village center was restructured in the past years and a small modern shopping mall was erected, mirroring the buildings’ style by using red brick, but otherwise following very modern lines. It is a controversial building for the residents. It accommodates a supermarket and some boutiques and the older remaining parts of the center complement more boutiques, bakeries, an ice cream shop and an Italian restaurant. Further south, but still in walking distance of the center, a steakhouse invites its guests. A little further the above mentioned Herrenhaus serves tea and cakes in a gorgeous surrounding of the 17th century and offers a beautiful recreational area as it is directly located at the Alster banks. A big meadow spreads beautifully between the Torhaus, which harbors a museum on the history of Wellingsbüttel / Alstertal and the Herrenhaus. The Herrenhaus is connected to an upper-class retirement home and is thus frequented by elderly people and their relatives. To the north the hotel and restaurant, Rondel, and its stylish sister, Del, invite to have a nice dinner. Wellingsbüttel also has a very beautiful church which isextremely popular for weddings.